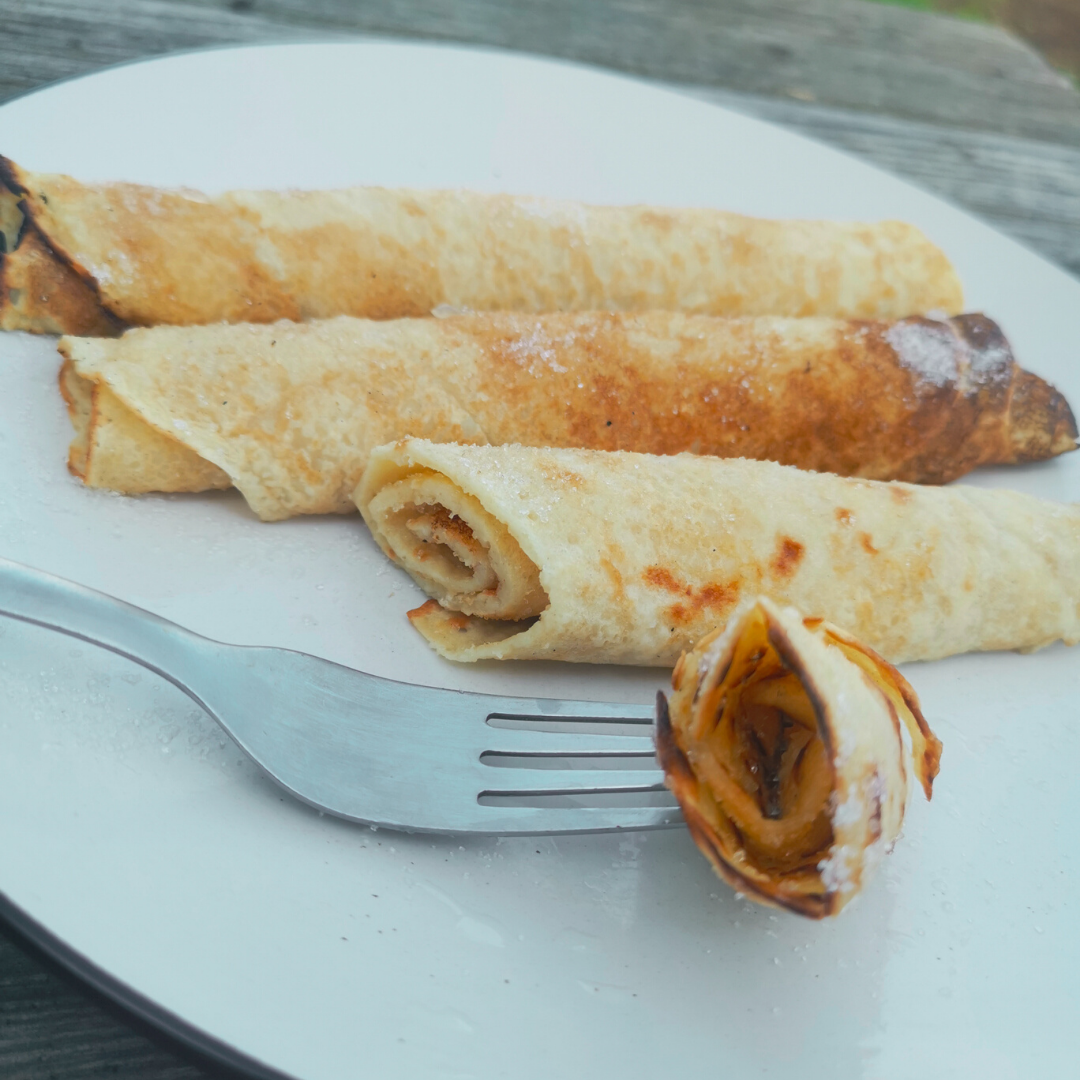 1 1/3 cups 300 ml dairy-free milk (almond, soy etc…) 2 tbsp vegetable oil plus more for frying 2 tsp lemon juice or apple cider vinegar 1 tsp vanilla extract 1 1/2 cups 175g plain (all purpose) flour 2 tbsp cornstarch / cornflour 2 tsp baking powder 2 tsp sugar (optional) I added the sugar the first time I made them but haven’t done since as they really don’t need it. I’ve also discovered that you can make these with self-raising flour, too – just omit the baking powder. I’ve used coconut milk, almond milk, and soy milk for this recipe and all worked – this time I went with soy. If you don’t have vanilla extract to hand then they can also do without.

I adore pancakes. They’re one of my favourite Sunday morning breakfasts. There are loads of vegan pancake recipes online without eggs, but it’s not always easy to find really good ones. Lots of them contain mashed banana (I like banana, but not when made into a pancake), and others contain ingredients that are either expensive or difficult to find.

I actually decided to review the following vegan pancakes recipe from Veggie Desserts for a reason other than I love them. Whilst these are “American-style”, I’ve discovered that they can also be made into some truly excellent British vegan pancakes. The majority of vegan recipes I’ve come across for pancakes are American or Canadian, so I’m so glad I’ve finally found one that also works as the British pancake I know and love!

***Please note: This is a recipe review and not a recipe created by myself. The link to the original recipe is below!*** 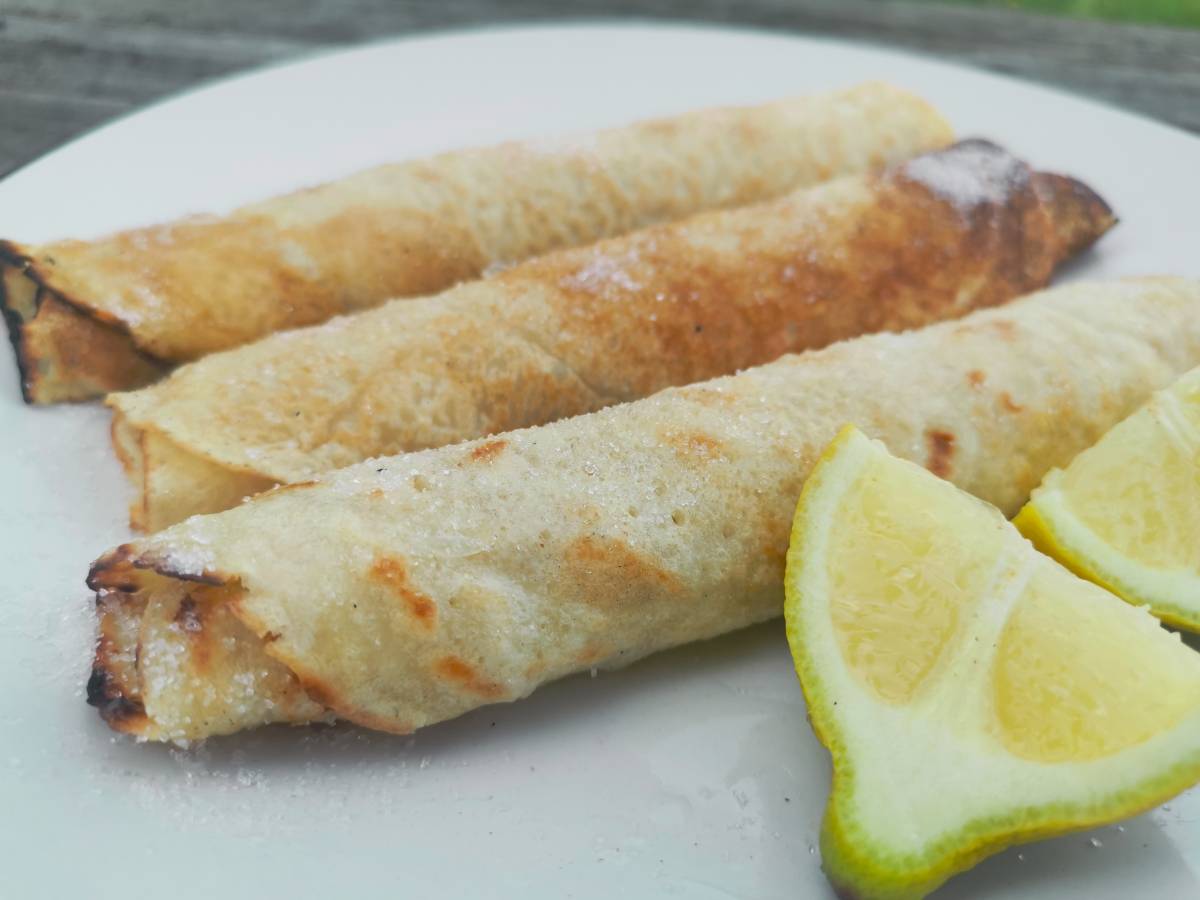 This pancake recipe is slightly different from others because it has a bit of waiting time involved. First, you need to mix the milk, oil, vanilla extract, and lemon juice/apple cider vinegar. You then set it to one side for five minutes. During this time I combine the flour, baking powder, and cornstarch, then pour in the liquid once ready. The recipe points out that it should only be mixed very briefly, and it is supposed to lumpy. I mixed mine until it was just combined, breaking up any huge lumps of flour but leaving the rest. 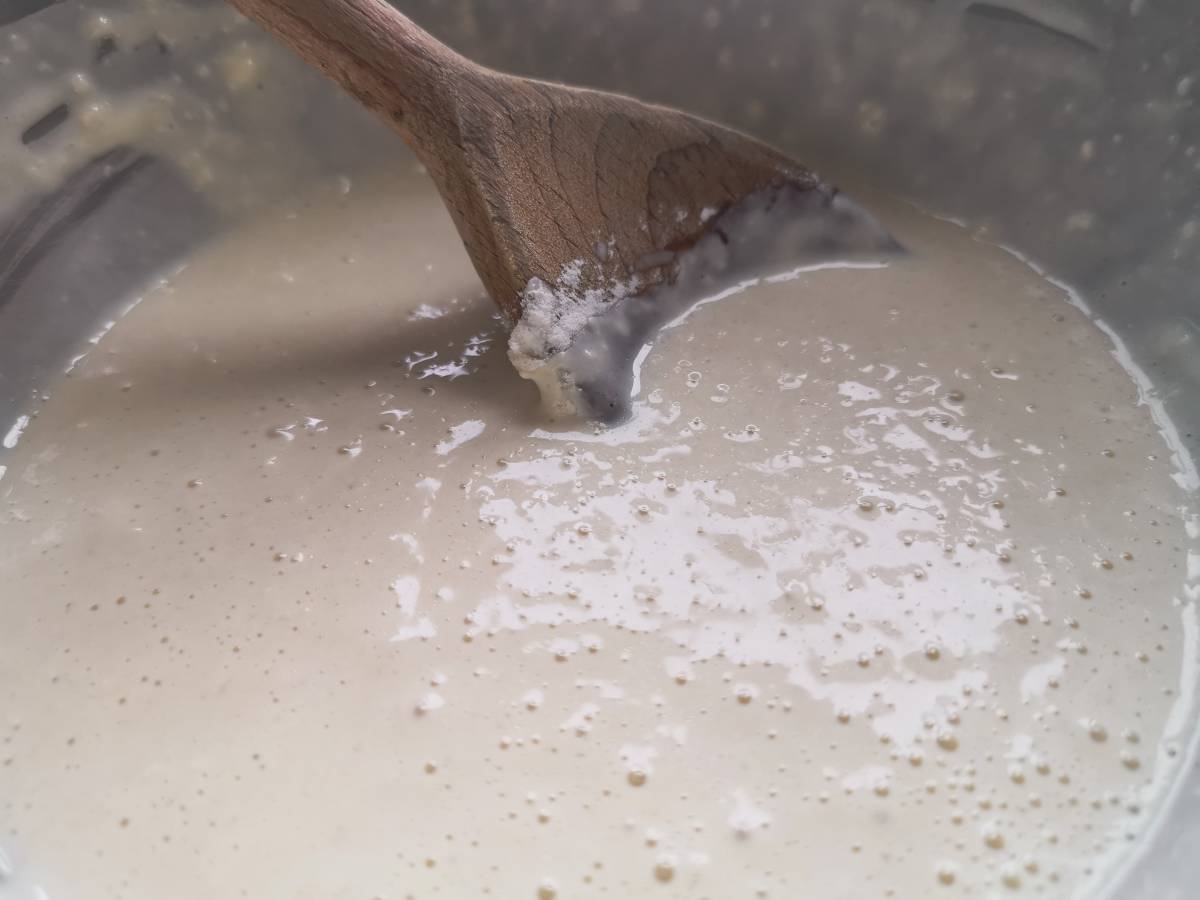 You then leave the mixture for another five minutes (it will bubble ever so slightly, which is fine!). And then, of course it’s time to fry.

Here’s where the British part comes in. The recipe from Veggie Delights calls for them to be made thick, like traditional American pancakes would be. However, if you want them British then all you need to do is spread the mixture out a lot more thinly. I use a big pan to do this, and find that the recipe makes about six to seven pancakes this way. If there are any large lumps when poured into the pan then you can easily sort these out with the back of a spoon whilst still liquid. 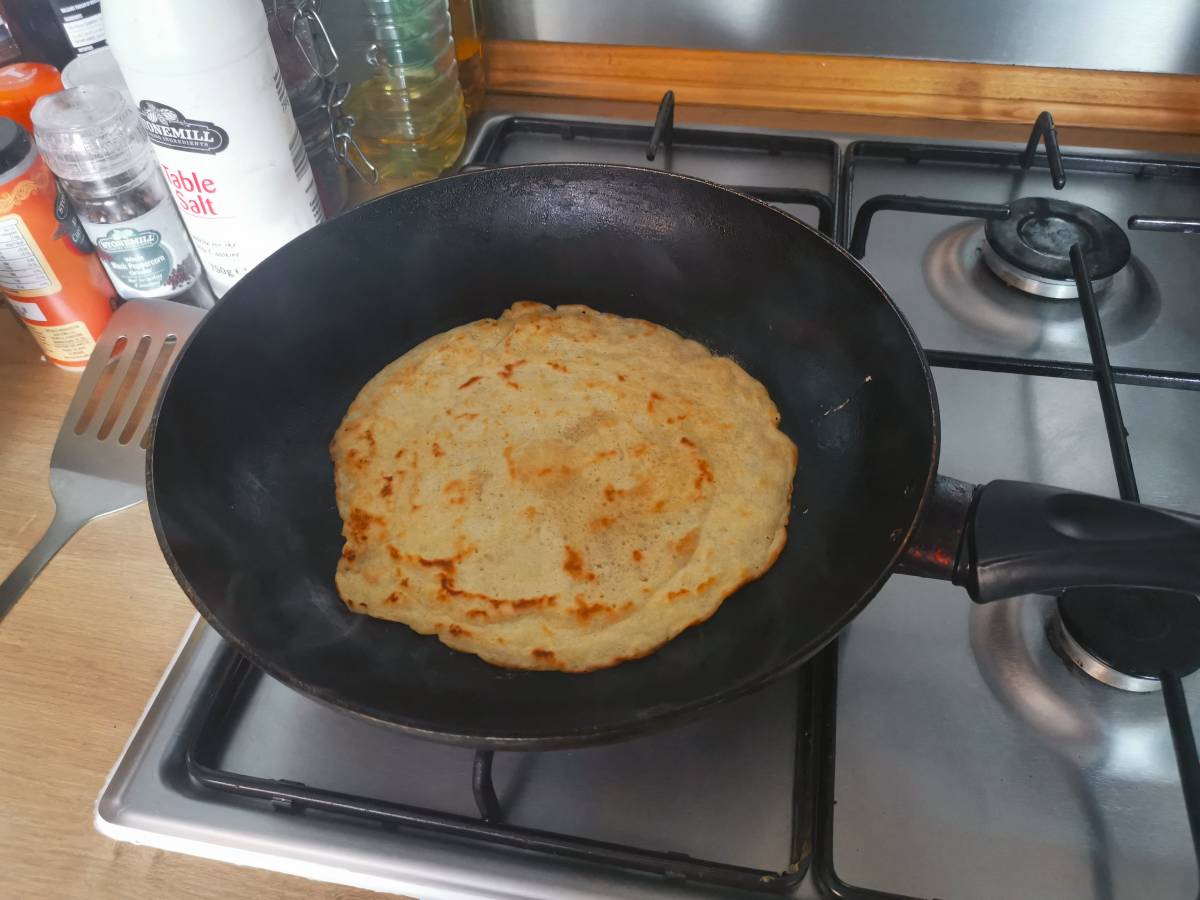 I had no problems with the cooking process – the pancakes were easy to fry like normal ones, and there was no issue with sticking. You honestly wouldn’t be able to tell you were using a vegan mixture!

As always, the pancakes came out perfect this time around. It’s easy to cook them to exactly how you like them and they held their shape. They will work with a whole variety of different toppings, but I went for the classic British option – lemon and sugar. For those that haven’t tried it before I recommend it, but make sure you use fresh lemon juice! It’s just not the same with bottled. I’d also 100% recommend you don’t use this topping if you make them American-style – I tried it previously but the lemon juice just isn’t saucy enough for the thickness of the pancakes and they end up feeling quite dense and dry. 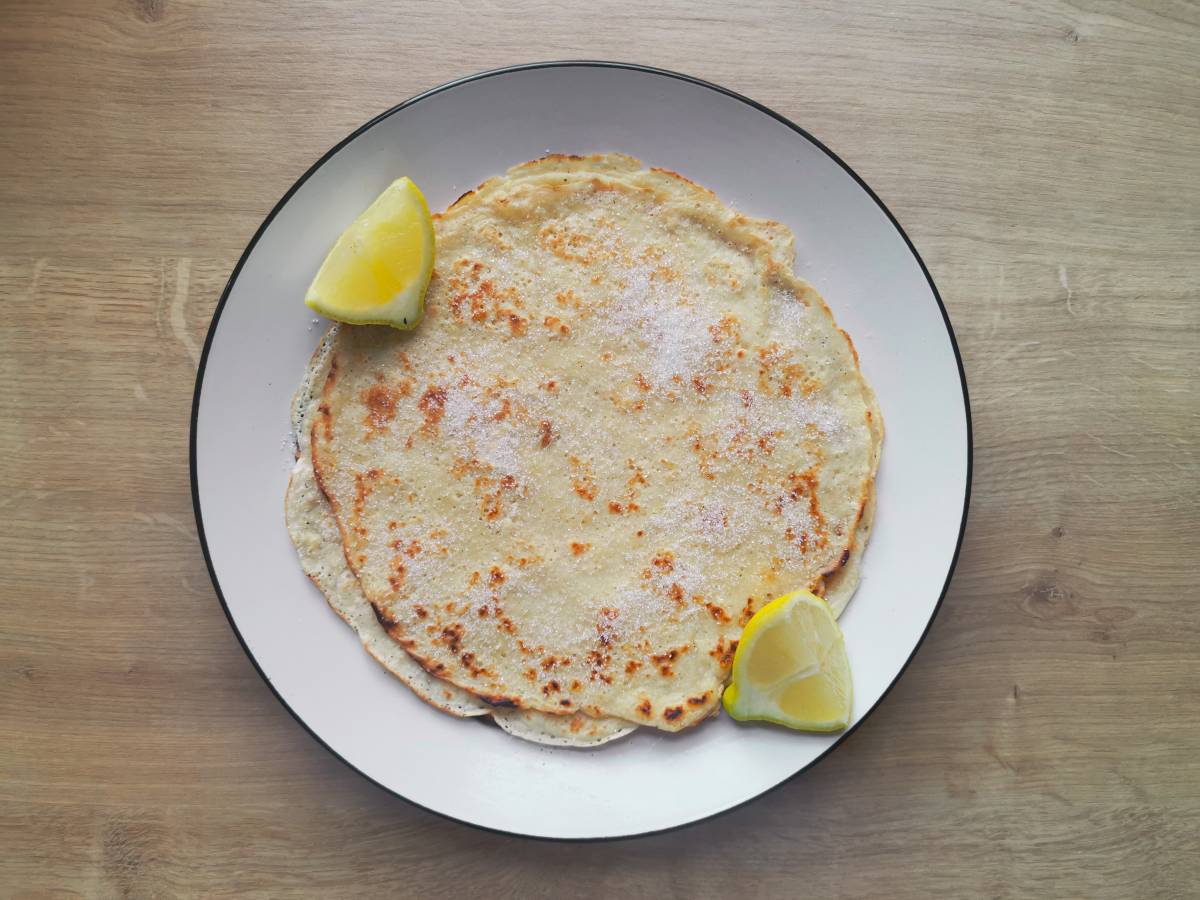 If you’re making American pancakes then maple syrup works a treat, or fresh fruit and yoghurt/cream would be gorgeous as well. You could even go with something savoury, like fried vegetables or spiced potato pieces.

One thing I would say is that I think the portion size is incorrect – I usually eat three pancakes per serving, so this would have served two for me. Maybe it could stretch to three portions as a smaller dish, but for a proper breakfast I really needed half the mixture’s worth. Bear this in mind if you would also eat a similar amount!

There’s a reason I’ve made this recipe multiple times, and that’s because they work so well! Kate from Veggie Delights has created something really good here, and it’s another recipe that makes being vegan so easy. Knowing that I can still make British vegan pancakes is such a relief! I know I’ll be using this recipe many times to come, and because they come out identical to regular pancakes they’re perfect when you’re cooking for non-vegans, too.

If you’d like to make them too then check out the recipe at Veggie Delights. You also can read my original review of the pancakes over at Pages Places & Plates.

What’s your go-to pancake topping? Share your favourites below!