What does it mean to be Spiritually Premeditated? 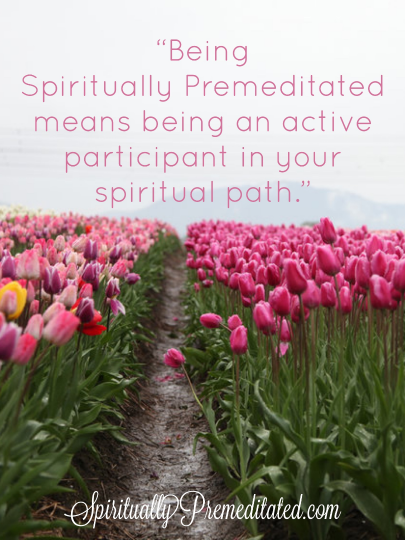 Firstly, I am going to offer up congratulations to myself and the universe for coming up with a blog name that in my opinion is perfect! But what does it mean? Why does it exist and why are you here?

Being Spiritually Premeditated means being an active participant in my spiritual path. It is being accountable to myself to continue on my path, regardless of where it leads me. It's about manifesting all the things I have desired, but shy-ed away from.

I want to write, I want be a spiritual person. I want to be in tune with myself and the universe.

How do I make this happen? I connect. I unite. I yoke together and I share all of the practices I have dabbled with over the years into one place: here.

My spiritual journey began just as a practice of what I don’t believe. I was raised Roman Catholic, went to Catholic school, went to church, wore the uniform but didn’t truly connect with the religion I went through the motions of practicing. There is, of course, a major distinction between religion and spirituality. Without dwelling on definitions, lets just say that you can be both religious and spiritual at the same time; HOWEVER, you do not have to be religious to be spiritual.

I redefined what I thought in my early twenties. I stopped using the word “God.” I determined that I believed in something greater than myself, but I did not label as being male or female, or having a name. I remember reading a ‘Reader’s Digest’ article in a doctor’s office once that had an interview on the topic of spirituality. The person being interviewed was asked point blank if they believed in God, and their answer was that they  believed that ‘God’ was missing an ‘o.’ God is actually good.

WHOA! This was like an epiphany for me….a type of spiritual awakening, if you will. I didn’t believe in God as the almighty father. I believed in the power of goodness and its energy. After all, God is supposed to be good. It was a complete re framing of what I had been raised to believe.

I never have or will identify as being an atheist, and I don’t think agnostic quite fits either.

I stayed in this place of believing in something greater than me that encompassed the energy of goodness for a long time without elaborating until my mid 20’s. I became interested in yoga and meditation. Yoga in itself is not a spiritual practice, however, many of its principles can be transferred to a spiritual practice if you desire. Yoga promotes complete and utter acceptance of yourself and living in the present moment. It seeks to unite mind and body (and spirit, if you like). Yoga translates to the meaning of being “yoked together” or united.

I believe very strongly in the principles of yoga, and in my mind the higher power of goodness could exist within this practice of stillness and breath. I found myself connecting and being curious about energy (or prana or chi). As I studied things like Chakras, Ayurveda, Chi Gong, Reiki and Meditation I came to accept the existence of an energy far greater than myself.

I refined my spiritual belief statement to “I believe in energy.”

Discovering Oracle cards was a turning point for me. I will write about why in the future, but it caused me to start looking for, believing in, and asking for signs from the power greater than me….that energy which embodied goodness, but also what I discovered was so vast and great it could only be called ‘The Universe.’ Coincidences, synchronicity, and intuition all became part of my spiritual practices. I discovered the energy of the moon, the energy of sound (Nada yoga), crystal energy and more.

I had many beliefs, but they were disorganized. I found it difficult to commit to spiritual practices because I didn’t know which ones to commit to. Simply doing yoga didn’t satisfy what I needed, nor did doing qi gong or chanting. It was frustrating. I wanted to be on a linear path but didn’t have the tools. Until I found them.

I accidentally discovered Gabrielle Bernstein while browsing through my audible audio book recommendations. “The Universe Has Your Back” was the title of her new book. It resonated with me, and so I bought it (all the while rolling my eyes at myself for purchasing yet another self help book). I didn’t listen to book, but then for Christmas I asked for another book by Gabby, Spirit Junkie. I also received one of her Oracle Card decks. But still, I did not listen to the book I had, I did not read the book I had, nor did I draw cards from the deck I had. I think I intuitively knew that her teachings would inspire me beyond my wildest dreams, but my avoidance of them was because I was not ready.

Almost a year after purchasing her audio book, I began listening to it. My life had changed so much in that year. My husband and I separated, I was a working mother now supporting myself and my daughter, I had nothing holding me back.

I took notes profusely. Everything resonated, and my own beliefs all of a sudden seemed to organize themselves. Was she talking directly to me? It felt like it.

I learned what A Course in Miracles (ACIM) is. I had heard of it before, but did not realize that this text would become my guiding light.

I needed a teacher, a coach, a guiding light and a practice. Gabby gave this to me. I follow her teachings, which are rooted in the ACIM. I do not feel ready to study the ACIM on my own just yet, but I love the way it is presented to be through Gabby’s books, lectures, and meditations.

My spiritual journey now has a path. I want to share how I got here, and what it is like to be here. I want to celebrate the miracle of writing this post and creating this website. I want to share my gratitude in hopes that it will be contagious and that the universe will continue to bring me good fortune. I planned my spirituality. It was premeditated, but its manifestation has been unpremeditated in so many ways.

I have avoided writing a blog for so long, usually because I could never think of the perfect name for it. But then “Spiritually Premeditated” popped into my head. It's perfect. Its meant to be, and so it will.